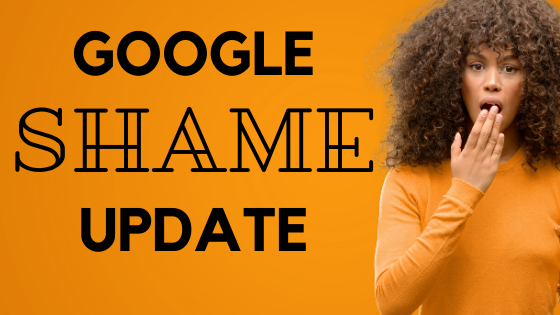 Know about Google Shame update. it a problem with your network connection, or it’s just the web page that has slow loading speed? Well, Google might answer this question for you in the future. Google has announced its plan to identify and mark websites with slow loading speeds through clear labeling.

The company hasn’t yet identified how it will label the slow sites, but it says that it might experiment with various options to find out which option is the best.

Google Shame update that needs to know about this. For instance, a slow loading site might display a loading page, which includes a warning, something like a caution icon, and a text reading “usually loads slow.” A fast website, on the other hand, might show a green progress indicator bar rather than a blue one at the top of the page. For the links, the browser might use the context menu to assist users to know whether the website will be slow, and this will help users to decide whether or not they want to click on the site.

Google’s long-term goal is to identify and label websites that offer a “high-quality” user experience, and this will include other factors, apart from the speed of the site. Google has not specified what these factors might be, but it says that the identification process will comprise of more strict principles that will be slowly rolled out over time. But, the primary goal is to make these good user experiences something achievable by web developers.

A more usable and faster website is an advantage to Google, as it assists the company to meet the needs of primary mobile users. Research has revealed that most Google users normally start their search from their mobile devices, and this has been the trend since 2015. This shift has however demanded new methods of ranking and indexing pages, and also serving users with varying connection speeds, as well as those without powerful devices.

When indexing web pages, Google now relies on the site’s mobile version, and it provides fast AMP pages to assist mobile users to access the information quickly. It now makes sense that Google has decided to push website owners to improve the speeds of their pages or risk being labeled as a slow site.

This feature will particularly be beneficial to Google users in new markets, where they don’t have access to a decent bandwidth and the prevalence of low-end smartphones is very high.

“Speed has been one of Chrome’s core principles since the beginning – we’re constantly working to give users an experience that is instant as they browse the web,” that’s according to a Chrome’s blog post. “That said, we have all visited web pages we thought would load fast, only to be met by an experience that could have been better. We think the web can do better…,” it continued.

These plans, alongside other updated focused at web developers, were announced during a Chrome Developer Summit. The other updates include a preview of Web Bundles, which is an API that allows web developers to distribute their web content in different formats like FTP, email, or USB. Besides, Portals, a web experience that was recently announced at Google I/O, was also demonstrated with early partner Fandango.