The Latest Google Updates That Were Rolled Out In June 2019 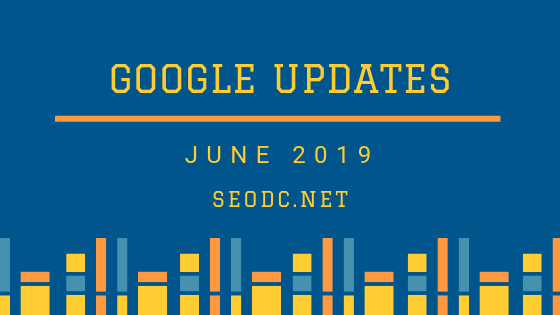 Google updates always we should know. In June 2019, Google released the June Broad Core Update and the Diversity Update, and these updates have caused some significant changes in the SERPs. In this post, we shall highlight these updates, the changes they have brought, and what you can do to retain your traffic.

Google Updates we need to know. The Google core algorithm update, which Google released in June 2019 includes a number of changes in the way Google indexes and ranks search results. After this update, webmasters are having a challenge in understanding whether their sites are still following the best SEO practices.

These updates have made it hard for webmasters to determine what precisely might have caused their sites to be negatives or positively affected by the Core Update.

Google Updates: what did the June 2019 Core Update target?

An analysis done to web ranking and traffic data suggests that the June 2019 Core Update is somehow similar to Google’s Core Update rolled out March 2019 in terms of targeting. The March 2019 update led to significant shakeups in particular niches like financial, legal, and health among others.

However, Google reveals that the June 2019 Core Update is an extensive update, and it doesn’t target any website in particular. After the release of the Core Update, there has been several industry theories and observations about the update.

But first, was the June 2019 Core Update a reversal of the Core Updates released in March 2019?

It’s important to understand that Google has some history of reverting its updates. But, the June 2019 Core Update is an indication that Google is trying to make this better, and with every Core Update released, it benefits the sites that lost in the previous Core Update.

Understanding the changes and relevance in search intent

According to Google, some sites will receive reduced traffic, and there is nothing to fix or change that at the moment. The main reason behind this is that Google has been doing an experiment, by changing the search result to see if that can match different search intent.

For example, in the last few years, you might have seen a site with specific health relates product sales page ranking because of that product’s name. However, now Google has changed this form of content ranking, and it displays informative content about the product rather than the sales pages.

Let’s, say you search the word “creatine”—Google will not display the product in its organic listing, but it will display article with informative content. So, we can see that the main aim of Google is to give you more information about the product before buying it.

Google says that the Diversity update released in June 2019 will limit the number of search results that will rank from the same site. Now, Google allows only two pages per site in every search result. Experts say that Google released this update in an attempt to expand site diversity. As highlighted earlier, the Diversity Update is not a part of the June 2019 Core Update, even though it happened in the same period.

However, there is one thing that you need to understand about the June 2019 Diversity Update—it’s not limited in case Google notices that more than one search result from the same site is relevant. Moreover, Google considers subdomains to be part of the primary domain, and the site diversity affects only the organic search engine results.

Thus, other search engine results like carousels featured snippets or map pack will not be affected by this two-page limit.

So, what should you do if you were affected by the June 2019 Core Update?

As we saw earlier, most of the SERPS are now fluctuating after the release of the June 2019 Core Update, and as a result, some sites are winning, and others are losing after every update.

If your website has dropped after the June 2019 Core Update, you might not be required to do anything to increase its traffic—unfortunately. However, it is advisable that you continue on improving your site as you wait for the next Core Update.

It’s important to note that your site might not be doing things the wrong way—it’s only that google made some changes in the search intent.

So, what should you do in case your site lost?

Identify the pages and keywords that are losing traffic

When doing this, don’t just monitor the general traffic of your site—it’s important to identify the specific pages that are losing traffic and the related keywords. This will assist you to have a clearer picture of the pages and keywords that are making your site to drop.

There is one thing that you need to understand—if one page is dropping, another one is probably winning. Do a keyword search for the keywords that you are dropping for, and then identify the type of content currently ranking in Google, and then compare it with the content in your pages.

Every Google update, like the June 2019 Core Update, should give you an excellent opportunity to expand your traffic. Therefore, do a Google search for the various ways in which you can diversify your traffic for better ranking.